THE END OF AN ARA 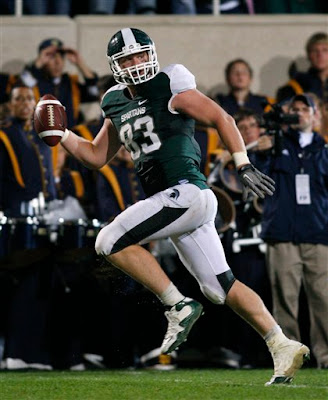 As a native of Ohio, it might seem odd that for the second consecutive post I'm choosing to focus on the state to our direct north, but after watching tonight's Notre Dame v. Michigan State game, I can't help but pour some more words on the state shaped like a mitten. And as an Ohio State fan, it also pains me to have to talk about Notre Dame, but the fact that they lost this heart-stopping contest will sure help alleviate some of those concerns.
The game in question is part of a near-annual affair. MSU and Notre Dame have played each other over 70 times, with the first contest coming in 1897. There have certainly been some incredible games throughout the rivalry's long history, but last night's showdown will surely live on as one of the greatest in their time on the field together, not only because of the frantic back-and-forth point scoring and overtime drama, but more importantly because MSU head coach Mark Dantonio has balls of solid brass.

While this game, which Michigan State won 34-31 in overtime, may not be the most talked-about in the series, it was certainly the most amazing one I've seen between the two sides and featured one of the most daring play calls I've seen in my 20 some odd years of watching college and pro football. It makes Sean Payton's decision to pull an onside kick to start the second half of last year's Superbowl look like the choice between paper and plastic. Seriously, I'm still in shock at what happened last night in East Lansing and it reaffirms my belief that college football is the best thing going in American sports.

The most famous match-up between MSU and Notre Dame is undoubtedly what some have dubbed "The Game of the Century", which took place in 1966. Coming into the game ND was No. 1 and MSU was No. 2. The game ended in a 10-10 tie, which ironically, can no longer happen in college football because of the implementation of overtime, which led to the incredible way that last night's game ended, but I digress...

To this day the game is surrounded by a shroud of controversy because of Notre Dame head coach Ara Parseghian's decision to run out the clock instead of trying to win the game in the final minutes. Parseghian knew that if the two teams tied and ND went on to beat USC the following weekend (an almost absolute certainty that was confirmed by an eventual 51-0 victory), the Irish would most likely win the 1966 National Championship. He was proved right, but the game nonetheless lives on in countless debates involving coaching strategy, gamesmanship, and differing philosophical approaches to sports in general.

Don't just take my word for it though. Parseghian's decision to live to fight another day against the Trojans the following weekend is so infamous that acclaimed author Denis Johnson made it one of the central metaphors of his National Book Award winning novel, Tree of Smoke (a tome that was an earth-shattering read for this writer, check it out if you haven't already). The novel is about the Vietnam War and the game is used by the book's own version of Colonel Kurtz, Colonel Francis Sands, to illustrate his view that the United States could not accept anything but victory in it's campaign in southeast Asia. Needless to say, Sparty was most definitely picking up what Col. Sands was laying down last night.

I know what you're thinking. A tie isn't possible anymore, so this year's MSU squad wasn't facing the same kind of ultimatum that the '66 ND squad was. Plus, that was a No. 1 v. No. 2 showdown near the end of the season, this was just a week three game in a long year with a lot of games left to play at much lower stakes.

While these are both accurate arguments and I have taken them into account, I must bring up the '66 game because it involves the same two teams and stands in stark contrast to the way last night's game ended. It also allows for discussion of the philosophical approach to sports that I mentioned a few lines back, in this case the approach that says when the win is there for the taking, you reach out and grab it. You don't hope for another opportunity to bring home a victory, no matter how big or small the stakes may be.

All that said, last night's game saw regulation end with the two teams knotted at 28-28 after a hard fought, back and forth contest. MSU won the coin toss in OT and chose to let Notre Dame get the ball first, which is a common practice in college football overtime games, where both teams get the ball at least once, each starting from the opponent's twenty-five yard line.

If you win the toss at the start of OT, the logic is that you want to let the other team go first, then see what you're up against when you get the ball at their twenty-five. It's a cool little piece of strategy that the NFL cannot claim because their OT rules force a period of sudden-death action where the first team to score wins. Last night, Notre Dame was unable to score a touchdown on their possession and instead kicked a field goal, putting them up by three and giving MSU a chance to win, lose, or tie as they took over on offense.

MSU started from the ND twenty-five knowing that they could score a touchdown and win the game, end up kicking a field goal and force double OT, or fail to do either and endure a heartbreaking home loss to the Irish. The Spartans attempt at a touchdown drive sputtered out quickly and quarterback Kirk Cousins was sacked on third down, leaving MSU with a 46 yard field goal try to tie the game and continue on into a second overtime period. Kicker Dan Conroy trotted out and lined up his kick looking like he had the requisite amount of pressure bearing down on upon him. If he nailed the kick, he's a hero on his way to a night of fanfare and worship (and likely an admiring coed if he played his cards right), if he missed the kick his options may have been limited to finding a hole somewhere to wallow in.

All the drama was there. Conroy was looking the outcome of the game dead in the face and the only thing I could imagine were images of Scott Norwood dancing through his head. He's young, inexperienced, and facing a long kick to win an overtime game against the team that worships at the alter of Touchdown Jesus. The only problem with my assumption that the kid was a ball of nerves is that Spartan head coach Mark Dantonio had already decided that Conroy was off the hook.

The pressure instead fell to the guy that was the would-be holder of that game deciding kick, senior punter Aaron Bates. The Spartans faked the field goal and Bates, instead of placing the ball on the ground for Conroy to kick, lofted it into the waiting arms of tight end Charlie Gantt, who trotted into the end zone for the game-winning touchdown.

Dantonio should be given (and will be given) all the praise that exists in the sporting world for calling in the fake field goal. The guy apprenticed under Ohio State head coach Jim Tressel as an assistant before being hired as head coach at Cincinnati then Michigan State, which takes the call from "wow, what a gutsy thing to do" all the way up to "no, I mean seriously, what did he just do?". Tressel is known as one of the most conservative (if not the most conservative) coaches in the college game and I guarantee his jaw dropped to the floor harder than any in the country as he watched a fake field goal turned touchdown pass decide an overtime game between Michigan State and Notre Dame.

After the game, Dantonio justified his play call ("Little Giants" is it's name, if you were curious) by pointing out his kicker's inexperience and the not-so-minuscule distance of the kick, but the truth is that not just Tressel, but 99.99% of the coaches in America would have tried for the tie and gone with the field goal, especially at home where the capacity crowd is on your side. But as staggering as it is, Dantonio decided to polish his brass balls in front of a national TV audience in the final moments of the latest game in a rivalry that started when William McKinley was president.

His decision to go for the win instead of the tie is so far removed from Ara Parseghian's option to live to fight another day in '66 that the two calls can't even be called polar opposites. Dantonio's bravery isn't just the venturous north to Parseghian's pragmatic south, it's the matter to Parseghian's anti-matter. The two calls obliterate each other on impact.

What a call and what a game. Man I love college football.
Posted by Marky Schultz at 3:03 AM