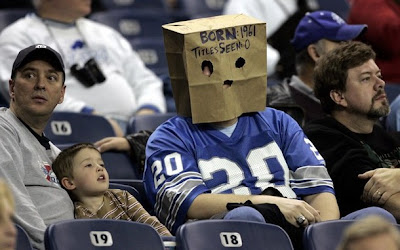 Unless you’ve been hiding out under a foreign sub-compact for the past few years, you should know that the city of Detroit has seen better days. The automotive industry is in flux, parts of the city resemble a post-apocalyptic ghost town, the mayor’s office is still trying to escape a cloud of indiscretion following the Kilpatrick administration, and the once thriving bed of Midwest industrial activity is mired in a rebuilding process that could take years to show signs of advancement. Oh yeah, and the city’s four major sports teams are flailing in an ocean of mediocrity whose waters refuse to recede.
Yes, it is one tough row to hoe being a Detroit sports fan. If it wasn’t bad enough that the Pistons are rebuilding and the Red Wings didn’t quite live up to their consistently high expectations in this year’s Stanley Cup playoffs, fans in the Motor City have also had to deal with the two worst pieces of officiating in the year 2010.

I guess folks from Detroit are used to a bit of bad luck these days, but with the Tigers’ Armando Galarraga throwing a perfect game that wasn’t and this weekend’s opening day win that first was then wasn’t for the Lions, fans might be wondering if they broke a few extra mirrors that they didn’t know about. If you didn’t already know, earlier this baseball season Galarraga threw a perfect game for the Detroit Tigers. He faced 27 batters and got 27 outs, except that the very last hitter was called safe at first base by umpire Jim Joyce, ruining the pitcher’s bid at perfection and sucking all of the air out of Comerica Park. Go ahead and check out the (would be) last at-bat/final out and see it for yourself, sports fans:

Joyce called Cleveland Indian Jason Donald safe on that harmless ground ball to the right side, with Galarraga coming over to cover first base and the ball clearly beating the runner to the bag. Joyce called the runner safe even though everyone in the stadium and those watching at home knew he was out. Out by a good half step. An easy call for any ump to make. Galarraga got the next batter out and the game was over, but his perfect game and chance to join one of the shortest lists in baseball statistical history was gone. At least Joyce ate crow and let us all know that he “kicked the shit out of” the call, though it certainly doesn’t help ‘Mando out much.

To his credit, Galaragga handled it all with class, as did Joyce, as did the fans of the Detroit Tigers, who applauded the two as they met at home plate before the following game at Comerica. Tough luck for the pitcher, the Tigers, and their fans. The obvious problem the play illustrated is that baseball doesn’t use instant replay for safe/out calls, so there was no way for Joyce’s error to be corrected during the game. A day later, baseball commissioner Bud Selig refused to overturn the erroneous call. This despite the fact that the next hitter to the plate also grounded out and Donald would have been the final batter anyway, with the 28th plate appearance changing nothing about the outcome of the game. Selig also defended baseball’s limited use of instant replay, maintaining that the blown call in Galaragga’s near perfecto would not be the impetus for the expanded use of replay in the near future.

Maybe he was on to something, because ironically, the NFL’s dogged commitment to getting every call correct on the field only accentuated the brutally unfair way in which the Detroit Lions were denied a win in the opening week of pro football’s 2010 season. Detroit’s Calvin Johnson (or Megatron, if you’re nasty) caught what everybody in Chicago, Detroit and the rest of the country thought was a game-winning catch as time trickled down against the Bears, except that he didn’t follow the NFL’s rule for a completion to the letter of the law.

Take a look at the play. Whether you do or don’t watch football on a consistent basis, I think it’s easy to see that the big guy in blue caught the ball and the team with the lion on their helmets won the game with precious few seconds remaining on the game clock.

The problem is that as Johnson rose to celebrate his catch, he did so by using the football he had just snagged out of the air as leverage. It squirted away as he ecstatically ran around the back of the end zone, deservedly basking in the glory of a game-winning catch. You can see an official raise his arms to signal a touchdown, but disregard that guy, because that call was almost instantaneously overturned and the play was ruled an incompletion. That eagle-eyed zebra somehow recalled the intricate vagaries of a rule about the ball being controlled all the way to the ground and took the catch away from Johnson and the victory away from the Lions. Check out The Big Lead if you’re as confused as I am, because conveniently enough for this writer, they tracked down the actual and completely mystifying text of the rule.

Every replay that was shown on FOX television afterward, which is essentially what officials look at when they review a call to see if it was correct, showed that Johnson caught the ball, landed with two feet, fell on his ass, then lost the ball when he was getting up. It didn’t matter though, because according to the rule, Johnson had to take the ball home with him, put it in a trophy case, fall asleep, wake up, kiss the ball, and brew a cup of coffee.

Well, not really, but the rule indicates that you have to keep the ball in your possession just about as long for it to actually be ruled a catch in the end zone. So while Joyce’s blown call could not be amended because baseball lacks the necessary instant replay rules, Calvin Johnson’s catch was left called incomplete despite the NFL’s stringent instant replay rules. It’s both baffling and heartbreaking for Lions’ fans and Megatron, but more importantly it points to the fact that no matter how much instant replay you have, it doesn’t matter one lick if your rule book is more complicated than the intricacies of supersymmetry.

So the good folks in Detroit are once again left holding a bag full of officiating ineptitude (no matter how “correct” the Johnson call actually was) and can only commiserate and speculate about a second heartbreaking decision by the officials. The Tigers’ future is still bright for the moment, despite missing the playoffs again this year, but the destitute Lions are coming off a two win season that followed a no-win season. Needless to say an opening day road win against a divisional opponent would have helped buoy a truly shipwrecked franchise. Oh yeah, did I mention their starting quarterback separated his shoulder in the first quarter too? It sure is a gift of to be a Lions’ fan, ain’t it?

So at the end of the day, Motown got jobbed again and while I can’t tell which is worse, having that breathtaking perfect game stolen or watching in disappointment as a rare win escaped the football team yet again, I suppose things can’t get much worse (hopefully). They say it’s always darkest before the dawn, but Detroit sure is looking more and more like an Alaskan winter these days when it comes to athletic competition. All I can say is keep your head up D-Town, we’ll all be rooting for you.
Posted by Marky Schultz at 11:43 PM