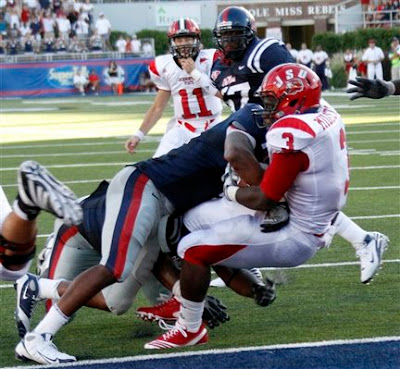 The thing to remember when you're talking about college football, or any college sport really, is that these are kids. Your average college athlete is between the ages of 18 and 23, with a few exceptions towards the older end of the spectrum when you're talking redshirts or guys that have sat out a year or two in the past. That means no matter how much we want to (and believe me I do) we can't take college sports too seriously.
These are amateur athletes after all, and because of that, our scrutiny and cynicism should take a back seat to the fun that can be had watching college athletics. It's what makes college sports superior to their professional counterparts in nearly every way. These kids aren't collecting million dollar paychecks (for some, yet - for others, never) and shouldn't be asked for too much in the way of success or failure, they should be allowed to live out their college careers like college kids, with optimism, naivete, and insouciance.

The problem is we, myself being included, just won't let them. Ohio State football is one of the few things outside of my immediate family that I truly love. I live for the OSU football season like no other time of year. When the winds change and the cool breath of autumn is forcing you out of the t-shirt and into the hoody, you know that football is soon to follow and with it will come agony and ecstasy, wins and losses, but above all else, a great deal of fun. Sure I'll pull my hair out, lose my voice and knock a few years of my life off pounding cigarettes in a nervous frenzy, but I will have fun doing it, no matter what.

If you aren't a fan, you must not be from Ohio and you might be missing out on some of the most satisfying athletic drama you're likely to come across. Need some proof? Just look at the first weekend of action, which played itself out from last Thursday through the following Monday. Thursday night may not have offered too much compelling action, mainly filled with powerhouse programs shredding inferior opponents, but by Monday we already had a season's worth of drama packed into a long Labor Day weekend.

The highlights came in games of consequence and seemingly less-than-alluring match-ups alike and it reminded me once again the appeal of college football on the whole, no matter if you root for a perennially good SEC squad or some kids from northern Florida who took down one of those aforementioned Southeast Conference forces. The game of the weekend? Too hard to call for this writer, but here are my week one highlights in no particular order.

Tulsa at East Carolina If you ask any football fan, the holy grail for any spectator is getting to see a Hail Mary pass decide the game. Well, that's exactly what this game gave us on a lovely Sunday afternoon in September. ECU's Dominique Davis threw a pass with time expiring into a crowd of defenders in the end zone, and his abnormally tall and lanky receiver Justin Jones hauled it in to win the game in front of a packed house of Pirate fans. Nothing more needs to be said really. Last throw, last play, last score, game over. A thing of true beauty on the first weekend of action. I'm sure it brought back some unhappy memories for Kentucky and Michigan fans, but it was a damn fine thing to see as a neutral observer.

Jacksonville State at Ole Miss The main story coming into this game was whether or not the NCAA would clear QB Jeremiah Masoli to play, but it didn't end up mattering as the boys from Jax State stole the thunder from an SEC squad that should have by all rights dominated this FCS team from the Sunshine State. Teams like Jax State usually get a nice paycheck to come play a far superior opponent like Ole Miss early on in the season, just to catch a quick beat down and collect their check. The Gamecocks were having none of that. They battled the Rebels to overtime and went for a truly ballsy two-point conversion in hostile territory to seal the deal. I'm not sure which was better, the incredible catch by Kevin Cooper that brought the Gamecocks within one or quarterback Cody Blanchard's amazing matador act to shovel the game winning two-point conversion through. Either way it was a breathtaking finish to a truly surprising game and is the equivalent of a JV squad from your podunk high school beating some Varsity Blues-style team from Texas on national television. In double overtime. Wow.

Boise State at Virginia Tech So, we have our Hail Mary and our jaw-dropping upset, what could top that? Well, the Broncos and the Hokies gave us something of a cherry atop the college football sundae in Washington D.C. Labor Day night. Boise State has gone from a no-name program that plays on blue turf in Idaho to a legitimate threat to make a run for the national championship in half a decade, coming into the season ranked only behind perennial contenders Ohio State and Alabama in the coaches' poll. The game had national title implications even though it was both teams' first outing of the year, and came down to a drive with under two minutes remaining led by the icy-veined Kellen Moore of Boise State. The game was a back and forth slugfest that somehow lived up to the hype and has a team from Boise fucking Idaho primed to be in the conversation for the national championship game at the end of the year. If they can win out, all hell will break loose in the BCS rankings and every fan in America will debate whether their less-than-impressive schedule holds up with that of college football's big boys.

Well, I'm about an hour away from the Miami v. OSU kick-off and my palms are practically sweating on the keys, so I'll end it here. Here's to another great weekend of football and to college athletes across the country for bashing each other's heads in so I have something to do on Saturdays in the fall.
Posted by Marky Schultz at 11:06 PM