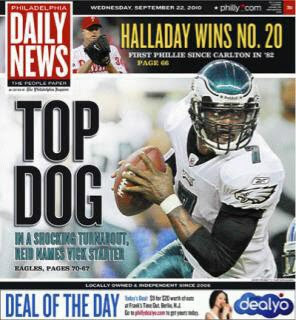 When the Washington Redskins played the Eagles in Philadelphia on Sunday, the storyline was supposed to be all about Donovan McNabb returning to the city to play against the team that traded him away in the off season. McNabb was dealt to the Redskins because the Eagles were confident in his back up, Kevin Kolb, and because they obviously thought his skills were diminishing in the latter part of his career. While it's a long season and we won't know for a while how good McNabb still is (especially on a team that isn't exactly setting the league on fire), a lot of the headlines that would have been focused on his return were shared with the fact that Michael Vick, and not the aforementioned Kolb, is actually the starting QB for the Eagles now. Not only that, but he's been really, really good at his job the last three weeks.
Kolb was concussed in the opening game of the season, and Vick stepped into the role of starter. The two large ironies about this new role are that Philadelphia gave Vick his second chance in the NFL because of the urging of McNabb while he was still in Philly and that Vick himself was subsequently injured early in Sunday's game and replaced by Kolb. All the featured players in the Vick comeback saga were on the field Sunday, and it made for a truly interesting storyline by the end of the day. The Skins beat the Eagles and McNabb found some revenge, but the shuffling at the QB position for Philadelphia is just getting to be too much to follow.

A year ago McNabb urges Philly to sign Vick as a third string QB, Philly then trades McNabb to allow Kevin Kolb, the second stringer, to become the starting QB in the off season. Next, Kolb gets hurt allowing Vick to be the starting QB, and then Vick gets hurt to give the job back to Kolb three games later--that last step in a game played between McNabb's old team and his new one. If you're a little lost, you're not the only one, Vick's return to the field has been anything but typical.

Up until week two this season, Vick hadn't started at QB since returning to the NFL after his prison sentence (you may remember something involving an illegal dog-fighting operation?) and the way he's played in the first three games has blown just about everybody away. He looks like himself again, only better. He's more comfortable in the pocket and knows how to use his game-changing quickness and running ability only when he has to. Up until his injury on Sunday, he was once again a starting quarterback for an NFL franchise and off to what can only be called an impressive start through the first three weeks of play.

Vick is a lightning rod, there's no two ways about it. Everybody's got an opinion on the former Hokie now that he's done his time in the pokey and is back playing like (if not better than) he used to when he was under center for the Atlanta Falcons. I've brought the topic of Vick up when surrounded by sports fans and non-sports fans alike, and it only lends more credence to my thought that the guy is the most fascinating topic of discussion in the sporting world since Mike Tyson.

Like Tyson, who served a jail sentence for raping a beauty queen, Vick's crime is heinous and without justification. He bank rolled a dog-fighting ring and did the time for his truly gut-wrenching crime. The reason Vick is so debated and hated and stuck up for all at the same time is due to a lot of intersecting factors, which I'd like to explore even though the story has lost some luster now that Vick's ribs appear to be in pieces after a literally bone-crunching hit early in Sunday's game.

I get in trouble with a lot of my pals for sticking up for Vick, something I don't do with unequivocal pride, but with the belief that second chances are as American as apple pie. I wrote in a previous post about the demise of Roger Clemens' public image, and about how the Rocket was going through a familiar cycle that many celebrities have taken a trip around. He was built up to hero status, only to be torn down as a cheater and a liar. The third step in this celebrity scandal process for a lot of transgressors is to be built back up again by the public that has both loved and scorned them. It's that last step that I want nothing to do with when it comes to Clemens, but something I am willing to do for Michael Vick.

Vick's crimes are absolutely beyond the pale. Torturing animals for personal entertainment is one of the worst things I can possibly imagine a person can do, and it's why so many people will never, ever give Vick the time of day again. In a lot of people's eyes, the man is evil incarnate and shouldn't be on the street today, let alone on a football field throwing touchdown passes in front of sold out crowds and millions of viewers at home. It sickens a lot of people that the guy is making around $4 million this year when he did what he did (though with all of the folks that he owes money, and the ins and outs of contract negotiation, he ain't gonna see nearly that much, but that's beside the point).

I get all that. I do. But I just think that Vick deserves that second chance that I won't give Roger Clemens. For one, he did his time. He went to a federal penitentiary for almost two years, where not only the glory of the football field was taken from him, but his freedom. I've never seen the inside of a jail cell, but I can imagine that going from NFL superstar to federal inmate for a year or so has an affect on the way you look at the world. I think that Vick came out of prison apologetic, repentant, and focused.

I think he looks at life through a lens that few of us who criticize him can understand, and I don't think that being convicted and then punished for his crimes means that he doesn't get to do his job anymore now that his freedom has been restored. I have absolutely no beef with the guy being allowed to play quarterback in the NFL again, because while that profession is indeed a privilege and not a right, he happens to play the sport that is one of the world's only true meritocracies. If you're good, you play. If you're the best at your position on the team, you start. If you're head and shoulders above the rest of the guys that play your position, you're a superstar. It's that simple.

It's the reason that Vick would never have been black-listed by the NFL, and I think it will end up helping him become a much better person at the end of the day. The guy is a creep, okay, I get that, but I certainly don't wish a wasted life upon anyone, considering how lucky everybody on this planet is to be able to live one out. Moments are precious, and I bet if you ask Vick if he now knows that, he wouldn't be able to get the "yes sir" out of his mouth fast enough.

Let's be honest, no matter how much or little jail time he did, it wasn't going to erase the fact that he murdered animals and funded a dog-fighting ring. Nothing is ever going to get that stain off of Vick and there is absolutely no way around that. So what are we to do, as a society? We've jailed him, scorned him in the public eye and belittled him in every way. Guess what? He's still here. He's still a person and one that happens to be blessed with freakish athletic talents that have never been seen at the position he plays on the field.

The real reason I like Vick as a redemption story so much is that he seems to be genuinely appreciative of his second chance at life and more importantly, because he has learned so much from his mistakes (something this writer struggles with doing on a daily basis). It's hard to recognize your faults and have the will to make changes that will correct them. If you watched the interview Vick sat down for on Fox NFL Sunday or this one, where he talks to his former coach Jim Mora, you cannot deny his authenticity or his commitment to change. His outlook has completely shifted and he is using his second act in the NFL to redirect the public gaze away from his talents as a quarterback and towards positive avenues off the field.

With the support of the Humane Society, Vick now uses his celebrity status and his tenure as dog-fighting ringmaster and federal inmate to try and show kids what not to do and the public in general why dog-fighting must be eradicated. Sure, the second part seems like common sense, but it is obviously a fight that must be had, because Michael Vick isn't the only guy in the country that has pit animal against animal for their own entertainment. The problem continues in many parts of the country, especially the southern United States, and he is now doing everything he can to help animal rights groups make it a thing of the past.

So if you want to hate Vick, go ahead and hate him, I'm just not coming along for the ride. I for one admire a man that can sink so low and pull himself back up a changed person and a positive influence. I've always enjoyed watching him on the football field, but now I can also enjoy his story as a tale of a man redeemed by his own failures. I'm not going to forgive him for what he did, but I'm not going to make him suffer for trying to make it right either.
Posted by Marky Schultz at 12:35 AM