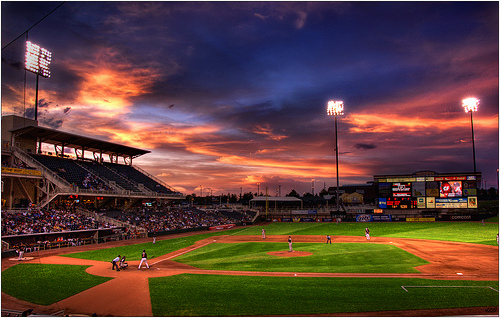 As October rolls right along and the fall begins in earnest, the sporting world in America hits what I like to call its sweet spot. The college football season is at its midway point, the NFL season is beginning to take shape, regular season hockey is starting up and the first whiffs of the NBA season can be found in the air as the Association's preseason gets underway. More important than any of that of course, is that the baseball playoffs have begun and with them a rejuvenation of the little boy in this writer, the one that still clings to the National Pastime as the absolute paradigm of grace and elegance in sport.
Say what you want about the Steroid Era and how boring the game is to watch, for myself and many others, baseball is the ultimate game in many ways. Granted I might be a bit biased as I come off the high of a week in which I watched Ken Burns' Baseball: The Tenth Inning and fell asleep twice with Field of Dreams on the Netflix as I drifted off into dreamland. Nevertheless, I cannot wait for the League Championship Series and the World Series to start playing themselves out. This baseball season in particular has been a fantastic return to form for the game, which is beginning to shake off the last vestiges of the steroid era and complete "The Year of the Pitcher", which will hopefully lead to "The Era of the Pitcher" if we're really lucky.
Yes, baseball saw it's greatest days when freakishly big, performance-enhanced meat heads were killing the ball and sending home runs into the upper atmosphere at record pace, but for a purist like me, there's nothing better than a good pitching duel. This year's playoffs have given us gem after gem when it comes to pitching performances already and this should come as absolutely no surprise to fans of the game. The juice is gone and now the guys on the mound are back on an even playing field. The divisional match-ups (the wild-card round if you're nasty) that just finished up were replete with nearly every elite arm the sport has to offer.
Tim Lincecum, CC Sabbathia, David Price, Cliff Lee and the indomitable Roy Halladay have all given us much to awe at, especially ol' Doc Halladay, who pitched the game's first playoff no-hitter since Don Larsen of the New York Yankees threw a perfect game against the rival Brooklyn Dodgers in the 1956 World Series. With so many of the league's best hurlers on display, this year's playoffs feel like baseball's topsy-turvy ride through the steroid-tainted nineties and aughts has finally leveled out and balance has been restored. Pitching is now just as important as hitting, which always used to be the case anyways.
I've written before about why I love baseball so much. The psychological warfare between hitter and pitcher, the chess match strategy between the managers, the incredible anticipation and graceful athleticism of the defense, the hitter connecting with a 90 mile per hour round ball with a round bat and sending it out and above the lush green grass of the outfield. Yeah, there a lot of reasons to love this game, but as Ken Burns points out in the latest addendum to his Baseball series for PBS, the game owes much of its enduring appeal to the fact that it has changed so little over the century or so since its inception.


The game we watch now is nearly identical to the one folks used to watch on makeshift fields built on empty farmland in the late 19th century. Baseball has a historical allure that few other sports can claim and a connection to the American way of life that is impossible to ignore. If you don't believe me, check out this clip from Field of Dreams. James Earl Jones lays it all out for us as the writer Terrence Mann, a central character in the film that has been brought to Iowa to remember the golden sheen of his childhood as a baseball fan and to try and convince his new pal Ray Kinsella (Kevin Costner) that people will indeed come to the field he has built in the middle of his cornfield, bank foreclosure be damned.
I nearly cry every time I watch that, no bullshit. For a baseball fan, it's just absolutely true in every way. The game has a purity that cannot be marred, not by the Black Sox scandal (which is at the heart of the plot of Field of Dreams) or the Steroid Era or the greed of players and team owners or the nerdy minutiae that has come with the influence of sabermetrics. It's a game that lacks the violence of football or hockey and doesn't quite have the flash and superstar appeal of the NBA, but one that endures in popularity, with the whir of turnstiles at ballparks and outlandish TV revenues to prove it.
It has a particular culture, a language, a mystique, and if I might go so far: a soul. When I called this time of year the sporting world's sweet spot, I was borrowing from baseball's large lexicon of original vocabulary, in this case that beautiful part of the bat just past where the Louisville Slugger logo rests, the part that gives a heavenly ride to the baseball as it crosses the plate and connects with a perfectly timed swing. Baseball has a song that everybody knows, a culinary history of cracker jacks and hot dogs and cups of beer, and it doesn't have a clock. Baseball unfurls itself at its own pace and if the point and click world we now call home won't allow you to sit back and watch it spread out on a fall evening in October, I don't know what more I can do to convince you why you should love it.
Now that we're down to four teams in this year's playoffs, the post season has really begun. The Giants play the Phillies in the National League Championship Series, with the Texas Rangers playing the New York Yankees in the AL. The Rangers just won their first playoff series in team history by besting the Tampa Bay Rays and find themselves the underdog against the boys in pinstripes, while the Giants, who made a late season run in the NL West to make it to the post season, find themselves with an equally daunting task against Philly's elite pitching staff. Two seven-game series in their respective leagues are about to be decided over the next week or so, leading to the World Series and all that is right with American sports.
If you've never given baseball the time of day as a viewer, I implore you to do so this October. If this country has the ability to embrace soccer the way it did during this year's World Cup, then the boredom argument just doesn't hold any water. Like the Beautiful Game, baseball is slow moving but captivating. It chugs along at its own pace and takes patience and attention to be enjoyed fully. Take a few hours and let a game spread out in front of you, listen to the poetry of the play-by-play and learn about the subtle nuances of the infield shift. Heck, maybe you'll even learn one of baseball's innumerable unwritten rules, like never making the first or third out trying for third base.
If at first you might groan when someone changes the channel over to the ballgame this October, and you're forced to tell them that you just can't watch baseball, know that for us folks who love it, there isn't any other athletic scratch that will get at our nine-inning-long itch.
Posted by Marky Schultz at 3:00 AM