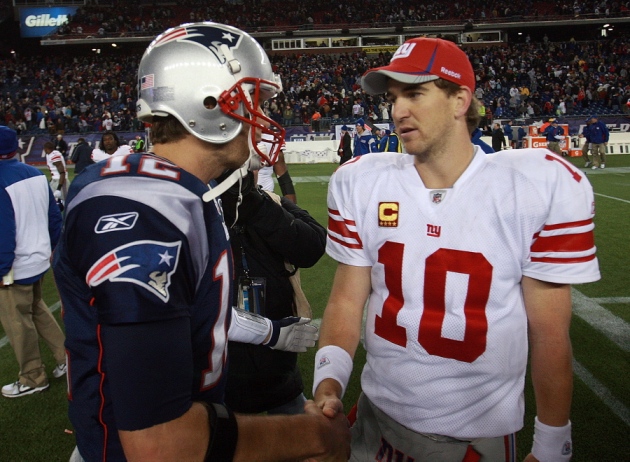 The Super Bowl, by nature, is never just another football game. From it's hyperbolic moniker to its grandiose affectations to the nonstop media attention, the game is without doubt the premiere event in American sports. While its position as the most talked about and attention-grabbing game of every sporting year is inarguable, there have certainly been better games than others, more intriguing match-ups than others, and juicier story lines than others. The last time that the Giants and the Patriots played in the Super Bowl in 2007 was one of those years when the hype machine was put into overdrive and the stories surrounding the game were clear-cut. The Patriots were trying to complete a perfect season, something that no one besides the 1972 Miami Dolphins have ever done and the first of the era of the 16-game schedule. They were big-time favorites (12 points) over the Giants, who had snuck into the game as an NFC Wildcard. But the Giants slew the Goliath from Foxboro and took home the title in dramatic fashion. This year's rematch of that legendary Super Bowl game was similar in many ways, and brought its own batch of dramatic and melodramatic subplots, beyond the unavoidable allure of a remake of that classic 2007 game.

Going into this year's Super Bowl, the most fascinating aspect of the game was the “what-if” scenario attached to each of the respective quarterbacks involved. For Tom Brady, if the Patriots were able to find a way to win, he could legitimately claim that he is the greatest quarterback who ever strapped on a helmet. While he has consistently nudged his nose into the room where this conversation was happening, a win in Super Bowl XLVI would cement his résumé and put him next to Joe Montana and John Elway in the three way race that I believe exists for the title of greatest QB of all time (sorry, but I’m just not old enough and don’t have the kind of perspective to go pre-Super Bowl era or really have a grasp of the talent level in the early years of the game). Montana is one of only two quarterbacks with four championship rings and Elway has two rings, but an amazing 5 Super Bowl appearances (which Brady matched this year) to go along with both quarterbacks' sterling reputations as go-to-guys in the closing moments of the game.
For Eli Manning, a Giants win in Super Bowl XLVI would add considerable fuel to a fire that up until this season has only been the size of a match head: who is the better Manning brother at the quarterback position? This didn’t used to be the kind of thing that was debated with any seriousness, because the older Manning was for so long clearly either the best or second best quarterback in all of football. He and Eli both had a ring, but Peyton had an unmatched statistical pedigree. But with Peyton in jeopardy of never playing another down in the NFL after off-season neck surgery, a Giants victory would give Eli his second ring by age 31 and it would become a legitimate argument that Eli’s rings trump Peyton’s numbers. Not to mention the fact that Eli would have knocked off Tom Brady to get both of his rings, who is supposed to be older brother’s arch rival. Not only that, but he already ruined Brady’s perfect season, which would have given him a point on his résumé that no other quarterback outside of Bob Griese can lay claim to. That's almost like winning one-and-a-half Super Bowls if you ask me.
Well, as it turned out, the Giants beat the Patriots 21-17 on Sunday night in a classic football game that had just as much drama, competitiveness and legendary plays that their first meeting in the 2007 Super Bowl had. Once again, Manning and the Giants made a fourth-quarter touchdown drive to go ahead late, and once again Brady was unable to respond in kind, suffering his second Super Bowl loss to the Giants in five years and raising heretofore unthinkable questions about his remaining skill as a quarterback and ability to rise to the occasion in the game’s most important moments. The fact that these two quarterbacks and these two teams have played such spectacular football in the Super Bowl is a delight for fans and a boon for the NFL’s caché in the world of American sports, but the way that Brady and Eli Manning have started to reach into the story of each other’s careers is some truly fascinating stuff. 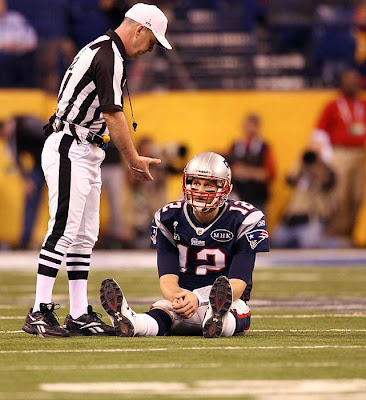 Lately, the two quarterbacks’ respective fates have been dramatically intertwined and are reaching almost dialectically opposing circumstances. Whereas Manning’s hail mary throw from midfield somehow finds a receiver’s hands in the divisional round against the Green Bay Packers, Brady’s is left falling to the turf before the outstretched arms of the banged-up Rob Gronkowski in this year’s Super Bowl. Where Brady’s perfectly thrown deep ball to Randy Moss near the end of the 2007 Super Bowl is tipped away at the last second, Manning’s is cradled perfectly by Mario Manningham, allowing him to stamp both feet to the ground like a library attendant marking a due date, right in the face of hoody-clad head coach Bill Belichick no less. Where Brady’s desperation chuck with D-Line pressure bearing down upon him is called for intentional grounding and results in a safety on his team’s first play from scrimmage in this year’s Super Bowl, Manning’s twirling, near-sack chuck into the middle of the field in the game winning drive of the 2007 Super Bowl somehow finds the arms of David Tyree, where he is forever left holding it against his helmet in the football field of memory.
So while Manning will continue to live out the winning scenario of that previous paragraph, what is next for Touchdown Tom? Well, the future is probably more murky than he would like to admit. Despite all of the attention being paid to Wes Welker’s drop near the four minute mark that had it resulted in a catch, would likely have also resulted in a win, Tom Brady is going to bear the brunt of the criticism for his team’s loss in this year’s Super Bowl. Just ask his wife, who snapped back at some drunken Giants fans with a retort that Tom isn’t probably very keen on and one that he knows doesn’t justify his late-career playoff and Super Bowl stumbles. I think Brady is starting to realize that while he may always have the historic upper hand on Eli’s brother Peyton, the younger Manning has now cost him two chances at football immortality. That fourth Super Bowl ring is on Brady’s mind like it was forged in the heart of Mount Doom, and Eli prevented him from achieving it in the most dramatic of fashion in 2007, as the culmination of a perfect season, and now again in 2012, where his superior play kept Tom Brady from that precious number four once again. Sure Brady is one of the greatest quarterbacks of all time, but right now, he is not the greatest, and there is no doubt in this writer’s mind that the man with millions of dollars, a super model wife and an already hall-of-fame-worthy career wants that GOAT title more than anything he has achieved up until this point. 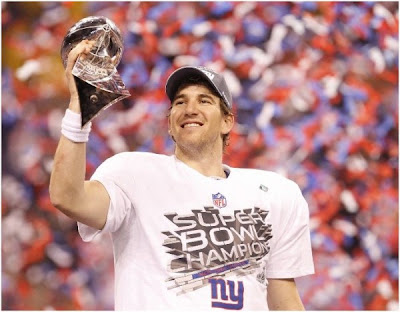 And perhaps all of this leads us to what might be a turn of the tide in the NFL. It is possible that Manning and the Giants’ victory in Super Bowl XLVI is the beginning of the end of an era for two quarterbacks and the clearly manifest start of one for another two. It used to be that the conversation about the best quarterback in the NFL started with P. Manning and ended with Brady, but it now seems that it starts with E. Manning and ends with Aaron Rodgers (you can decide where the NFL’s other clearly elite quarterback, Drew Brees shakes out, though he seems to be straddling both eras as of right now). Peyton is dealing with a neck injury that could all but ruin the rest of his career, and Brady has now lost the last two Super Bowls he’s played in. Meanwhile, Eli Manning is now two for two in Super Bowl appearances, leading two Giants teams that were not only unlikely to go deep into the playoffs, but a laughable Super Bowl pick at the start of the regular season and the playoffs in both of the 21st century seasons that they ended up winning it all. And for all of Peyton's numbers and adulation how many signature moments does he have as a a quarterback? Eli now has two, with his throws to Tyree over the middle and Manningham down the sideline, and not only are they memorable for him personally, but they are sure to become two of the most replayed in the history of the sport's biggest game, the Super Bowl. In addition, Aaron Rodgers set a new standard for what is possible at the quarterback position in this year’s regular season, and already grabbed his first ring in last year’s Super Bowl victory over the Pittsburgh Steelers, which ties him with Peyton Manning's lone championship and leaves him still one behind yet another current NFL starter, the Steelers' Ben Roethlisberger.
So while the younger Manning may not look the part quite as much as Brady or even older brother Peyton as Twitter so snarkily illustrates, and Rodgers got bounced by Eli's Giants in this year’s divisional round, the two quarterbacks have officially stepped forward to join Drew Brees and Big Ben in the debate about who's the best at the QB position in the NFL. None of these relatively younger quarterbacks seems in danger of slowing down at any point in the near future, and they have begun to kick up dust in the face of Brady and Peyton Manning, who were not only considered the two best quarterbacks in the NFL for a solid decade, but dominated the conversation on the position so fully that their recent lapse in productivity doesn’t just seem anomalous, it seems sacrilege. Personally, I’m not willing to write Brady off just yet, especially because the ragtag bunch of Patriots he just led to the Super Bowl only affirms his and head coach Bill Belichick's talent once again, but Manning’s neck injury is continually worrisome and it looks like amazingly, his days with the Indianapolis Colts are all but over.

Sometimes it can take weeks, months, even years to understand the impact of a single game, especially a Super Bowl, but this year's game has certainly started some debates about the elite players at the quarterback position in the NFL. A reporter asked Eli at the beginning of this season if he thought he was in Brady's class as far as quarterbacking went, and he got criticized and laughed at for saying he thought that yes, he definitely is. Well no one is laughing now and it seems that discussion will now begin as to who is the better Manning, and it will have to continue as to who is the best quarterback of all time. Sometimes the outcome of a game begs more questions than it ends up answering. This year's Super Bowl definitely feels like one of those classic debate-launchers. It might be that the only certain thing to come out of the Giants' victory and the Patriots defeat is a new level of uncertainty. The power struggle at the game's most important position is officially the most competitive it has been in more than 10 years and if it leads to more Super Bowls like the one we just witnessed on Sunday, please let the battle begin.
Posted by Marky Schultz at 9:29 PM