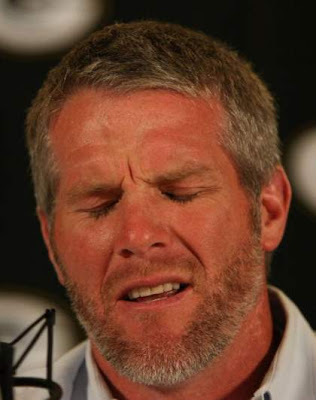 It’s funny that with some truly intriguing questions and entertaining story lines swirling around the NFL as we approach the start of the season, all anybody in the echo chamber of sports media can talk about is two guys who don’t seem to give a damn about training camp. If you listen to sports radio or read about football online, Brett Favre and Albert Haynesworth are all anyone has an opinion on.
The fact that I couldn’t give a rat’s ass about either of them has left me a little frustrated to say the least. Favre is acting like he wants to play football but talking like he doesn’t, something no one with a pulse should be surprised about after two and a half years of his preseason “look-at-me” bullshit. He’s going to play quarterback for the Minnesota Vikings this year, he just doesn’t want to go to training camp, OK? That’s it. He’s an asshole looking for an easy way out of camp and more money. Moving on...
The Washington Redskins' Albert Haynesworth is an infection, er, a player who has never shown that he is in the NFL for anything more than the paychecks. His fat behind can’t pass a simple conditioning test that his coach Mike Shanahan is making him take in order to start practicing with the team because he (what a shocker) skipped off-season workouts. Shanahan is trying to make a point to his slothful defensive lineman but the fact is that Haynesworth will end up playing for the Redskins this year or he’ll get shipped to a team that is desperate for D-line help. All this back and forth and saber rattling between the two doesn’t amount to much at the end of the day because Haynesworth is owed more money than any other team is interested in paying him. Old Al has proven time and again that he doesn’t care either way what happens, so neither do I. Moving on...

One thing that does get me pumped about this season of NFL action is T.O. going to Cincinnati to line up on the other side of the field with Chad Ochocinco. Carson Palmer is a hell of a quarterback, despite what his numbers look like from the past couple of seasons. He is competitive, intelligent, and accurate and now has the most potent receiving core in the league. I thank my lucky stars that Louisville is in close proximity to the River City because I will be enjoying regional telecasts of the most entertaining offense in football all year long.

The Bengals outlook was very, very good for this season already, coming off an ’09 division title gained via a sweep of their AFC North opponents. Now, to go along with a stout, athletic defense and a beast in the backfield ‘name of Cedric Benson, Palmer has two of the best pass catchers in the game with assuredly the two biggest mouths. Palmer has always kept 85 under control, so there’s no reason to think he can’t tame the other NFL wideout with his own reality television show. I mean, look at these celebration reels and tell me this season isn't going to be a whole lot of fun for Bengals fans:

Folks will be lobbying for synchronized celebrating as an Olympic sport (look out London) after the season “T. O-cho” is going to put together, mark my words. And I also think I coined “T. O-cho” just now, so don’t steal it.

Another story that seems to come around every year about this time is the amount of money that NFL rookies receive from their initial contracts. The NFL is all about guaranteed money because a player can be released whenever their team damn well feels like it, and the top picks in this year’s draft will see an absolute boatload of it. It’s pretty mind bottling that guys like overall number one pick Sam Bradford and number two man Ndamukong Suh will be hauling in around 50 and 40 million dollars guaranteed respectively, considering they’ve yet to play a down of pro ball. Obviously I don’t wish any of the rookies ill will, but just think about that for a second. These guys are receiving upwards of 50 million dollars because of what people assume they can do. Meanwhile, long time veterans of the league and young upstarts alike who have already proven their abilities struggle to eek out contracts that pay them a proportionate amount of cash for their skill level.

So teams throw tens of millions of dollars at kids in their early twenties who could very well blow out their knees or shoulders or hips (wink wink) before they even get to step on an NFL field. They are millionaires because they succeeded in college, which seems just a tad unfair to a hump like me who wrote very well in college but is unlikely to make 8 figures over the next 4 to 6 years to punch the keys for Sports Illustrated. I’m willing to bet the farm when the NFL and the Players’ Association finally hammer out their new collective bargaining agreement after this season that a rookie salary cap is part of the compromise.

A couple of quick hits on non-NFL stuff that has been making the rounds the last few days:

Shaq signs with the Celtics The Celtics just got older and Shaq finds himself on yet another new team, in search of the championship ring that has eluded him since leaving Miami. ‘Whatever’ is about all I can say. The guy won’t make the Celtics even marginally better but had to be brought in to fill the hole Kendrick Perkins leaves as he recovers from knee surgery. It’s more fun to think of his new nickname than actually give the move any real analysis.

Lance Armstrong is being investigated by the feds for doping Now this is a story. I will admit I have a favorable bias when it comes to Lance because my old man survived the same type of cancer as the 7 time Tour de France winner (fellas, remember to grab those balls every once in a while). That said, I give him the benefit of the doubt that he didn’t use PEDs because he’s passed every single drug test that he’s ever been asked to take. But it is telling that he competes in the dirtiest of all sports when it comes to the juice and has the same G-Man that led the BALCO investigation hot on his trail. Armstrong is beyond criticism for the majority of Americans considering all the money he’s raised to fight cancer and it would be a blow to his image unrivaled in the history of sports (Tiger included) if anything is turned up by all this snooping. Seriously, it would be like finding out Arthur Ashe got AIDS from a dirty heroin needle. Good luck Lance, because I honestly hope Nike doesn't have to print up some new "Live (Super-Humanly) Strong" bracelets anytime soon.

A-Rod hits his 600th career home run I’ve already addressed this issue to a certain extent in a previous post, which I wrote when Rodriguez admitted that he used steroids. It contains most of my thoughts on A-Rod as a player and steroid use in baseball, so if you’d like to check it out, you may. That being said, I can’t believe what little fanfare his hitting 600 received from the sports media. Steroid use is never, ever going to leave him be, I don’t care if he ends up with 800 home runs when it’s all said and done. He joined one of the most prestigious clubs in all of sports, but you’d think he was Crash Davis setting the minor-league dinger record considering the dearth of props being thrown his way. Instead, one of the most prolific sluggers in the history of baseball and perhaps one of it's all-time greatest all-around players is left to once again address the fact that he cheated his way into the record books. I can’t say I feel bad for you A-Rod, since you juiced up and only brought this on yourself, but it is a damn shame that baseball is going to have to wait a very long time in order to celebrate a “clean” player getting to 600. Sigh.

Well, that’s all for now. Stay tuned.
Posted by Marky Schultz at 1:34 AM