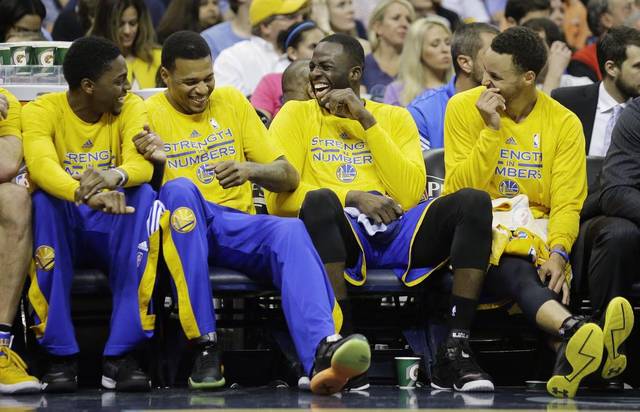 I don't like the Golden State Warriors. I haven't for a while, and maybe a little bit longer than a lot of my inevitable-backlash brethren. The last time I clearly remember having affection for them, they were the chippy upstarts with the feel-good-story point guard giving the Spurs a run for their money in the second round of the 2013 playoffs. I said to myself, there's a team on the rise, and good for them. Now, only three short years later, that seems like a distant memory. Part of my inability to get on board with what seems like the entirety of the sports media and the whole fuzzy free world in their adoring love for the Dubs is that I'm a Lakers fan. That makes it really hard to root for other western conference teams in any way shape or form, sure, but the biggest part of my contempt for Golden State as they have risen to the basketball mountaintop lay in the fact that they carry themselves like a bunch of spoiled brats.

Matter of fact, a game against my Lakers earlier this regular season is a perfect example of why they really burn my toast on both sides. In pursuit of a record 73 regular season wins, the Warriors should have had no trouble with the young–––by all estimates terrible–––team I root for in early March, when they were absolutely rolling through their schedule. But the Dubs came out flat that afternoon, and my young guys flattened them in the Staples Center. It was a good win for us, and a potentially really bad one for the Warriors, who had not yet completed their magical 73-win season, and needed every W they could get to surpass Michael Jordan's 72-win Chicago Bulls. But instead of being humbled by a thumping from a clearly inferior team, I watched as their starters, who were relegated to the bench in the fourth quarter with the game out of reach, laughed their collective asses off.

I don't know what they were laughing at, but it shouldn't have been the LA Lakers, who were beating them handily, or really anything else for that matter. Winning percentage-wise, they were being visibly flip about the worst upset in NBA history.  It spoke to an arrogance that I feel pervades the team and the organization top to bottom. As an at-times arrogant prick myself, I can tell you, there are moments when you have to turn that bravado off, reassess, and get humble for a moment. A blowout loss to one of the league's worst teams probably should have been one of those moments, but there they were, yucking it up.

And that's when my mild to warm dislike for them turned into a ghost pepper hot fury. I thought, you know what, fuck these guys. As good as they are, we just dismantled them on national television, and they can't even suck it up and stoically accept defeat. Not only did it show a lack of respect for the valiant effort their opponent just put out (and truly, utterly piss me off), but it also made me think: where do these guys get off acting this way?

Yes, at that juncture they were defending champs, but they also won that ring with a string of match-up good luck in last year's Western Conference Playoffs. They also dropped two games to a Cavs team in that same year's Finals that found LeBron James without the next two best players on his team, Kevin Love and Kyrie Irving, who were also luckily for the Warriors, lost to injury. And yes, they were chasing the greatest regular season in NBA history, playing at a level so high that even a Delores Park hippie would call it stratospheric. But that's exactly when you should take a look in the mirror and say, "why did we just lose this gimme game to the lowly Lakers when we're trying to win 73 of them?"

At that moment, they chose to laugh instead of reflect, and it's not without a large amount of schadenfreude that I return the favor. After completing their record-setting regular season and coming back from a 3-1 deficit in the 2016 Western Conference Finals to set up a magical rematch with a now-healthy Cavaliers squad, they seemed like a team of destiny. They romped the Cavs in the first two games of the Finals and looked poised to torch my burnt toast to a blackened carbon nugget with a waltz to a second consecutive title. And even when they got thumped in game three, they came back to crush the Cavs in game four and put the series at an historically insurmountable advantage of 3-1. You see unlike their unlikely comeback against the Thunder in the previous round, no team in NBA history had climbed back from that deficit in the Finals. So towards the end of that pivotal game four, when they could've stayed laser-focused and accomplished their goal in a coming close-out game five, they made another arrogant mistake.

They turned the series around, right there in that victory they had in hand, and then proceeded to collapse like a failed Silicon Valley start-up in the next seven days. The hedge fund money began to bleed right out of the budget when their emotional and playmaking heartbeat, Draymond Green, took a shot at LeBron James and his groin with a flailing punch, this in the midst of a Warriors victory (in the game and the series) being all but an academic certainty. It made for the third time in the playoffs that Green, an unmitigated prick whose dick-head antics have inexplicably been re-branded as "intensity", took a shot at a dude's undercarriage. It also, upon league review, was a flagrant foul, giving Green enough of such fouls in the post-season to warrant a suspension he probably should've been handed in the previous series against the Thunder. You know, when he KICKED A MAN IN THE GROIN.

But yeah, Green followed up his hat-trick low blow by calling LeBron James something close to or exactly a "fucking bitch" on court, which isn't so much laughing from the bench at a bunch of twenty-something Lakers beating the stuffing out of you, but is perhaps the most blatant example of what happens when you tug on Superman's cape. Bron wasn't happy about any of it, and made that known to the press. So, with their third best player and emotional engine suspended going into a close-out game five at home, the Dubs, again, could have got their humble on and put Green's absence to the side and focused on winning the next game and a second consecutive NBA title. Instead, they pissed on the cape they just yanked on. 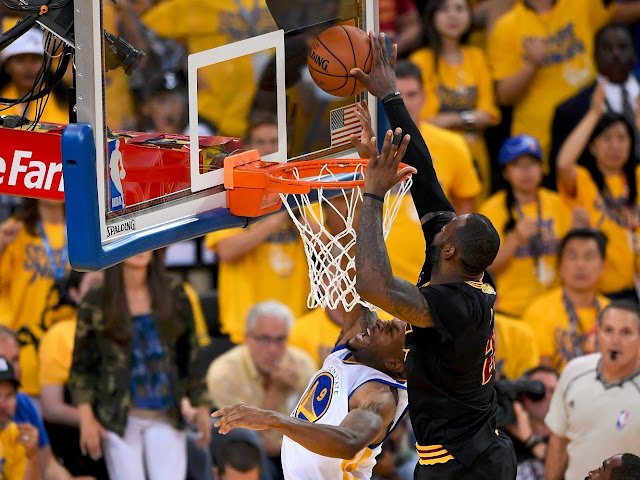 Klay Thompson told the press that he guessed Green must have hurt LeBron's feelings, and another role player on the team tweeted a fucking baby bottle emoji, a not so subtle jab at the best player on either team. And then that same best player, he of the four MVP's and two NBA championships, proceeded to forgo that metaphorical cape and become a literal basketball superhero. LBJ and the Cavs beat the Dubs the next three games consecutively, two of which were in Oakland, with James leading the way via back-to-back games of 41 points and a game seven triple double that shattered any kind of hubris these stupid Golden State jerks thought they had earned.

I've taken shots at LeBron in the past on this very same patch of the Internet blogosphere, and been proven wrong to a staggering degree. I questioned his fire and his outlook when he left Cleveland to go to the Miami Heat, but he made me look like an idiot with a pair of championships and even more notches on an NBA resume that when all the dust settles, just might be the most impressive in the league's history. But I licked my rhetorical wounds, both because he returned to my home state and the Cavaliers in 2014 with a more mature mindset, but moreover a displayed greatness that I feel lucky to witness, no Nike-branded pun intended.

As a fan, I enjoy watching elite athletes at the top of their game more than anything else, and despite the media's opinion that Stephen Curry and the Warriors had stolen his mantle as the best in the world, I knew better. I knew that a grown-up LeBron was not somebody to be trifled with, and as I've said so many times before, you doubt his particular brand of greatness at your own peril. It's a shame that the Warriors didn't see it the same way, because they might not have been quite so sure of themselves and pissed away the greatest season in NBA history.

Nobody has ever won an NBA Finals down 3-1. LeBron and the Cavs have now done exactly that, and on the 73-win Warriors' home floor to truly drive the history home. The city of Cleveland hasn't had a championship professional sports team in over 50 years. LeBron and the Cavs just won one, in a way that no other team in their sport ever has. Stephen Curry and Klay Thompson scored a combined 31 points in the deciding game of the 2016 Finals, one less than their shit-heel teammate Draymond Green scored by himself. If they can't get humble now, I pity those Golden State fools. But as an Ohio boy, and a basketball fan, and a man who believes in respecting your opponent, I could not be happier that they lost. I'm laughing a very loud laugh right now, and the Dubs have done little all season to prevent me from feeling like I've earned it. They pushed to the limit what had become an increasingly entitled title-team attitude, and a righteous motherfucker from the Buckeye state just shoved it all the way down their chuckling throats. That feels pretty good, and I just had to say it.
Posted by Marky Schultz at 4:00 PM