While I try to keep Bo Jackson's Hip a place where variety is the norm, I can't help but write a second straight post on the NFL, considering what went down on Sunday afternoon in Houston, Texas. The Texans played AFC South rival Tennessee and while the headlines should have been about the battle for a divisional win and the wide-open race for the AFC South championship, all anyone can talk about is the on-field brawl that happened between Texans' wide receiver Andre Johnson and Titans' cornerback Cortland Finnegan.
Personally, I've never seen anything quite like the fight in my years watching football. Sure, corners and wide receivers like to go at it, but when helmets are ripped off and punches are thrown, we've definitely got something new on our hands.

Here's what it looked like, in case you missed it:


There's that old saying that familiarity breeds contempt, which is an apt description for the way a lot of teams in the same division begin to loathe one and other as the years and seasons go on in the NFL. Playing the other squads in your division twice each year leads to rivalries between teams and individual players, and the fight between Johnson and Finnegan could have happened a lot of places in the NFL. The fact that it happened between these two players is kind of expected, but also very surprising.
If you aren't familiar with Finnegan's ways, he is consistently bratty, physical, and cocksure. He's one of those athletes that lives to get under the other guy's skin, an attitude that is not rare for anybody that plays the cornerback position. Finnegan however, seems to revel in his bad boy persona. A year ago, when Sports Illustrated polled NFL players on who were the dirtiest guys in the league, Finnegan finished sixth. This wasn't surprising to most, and the kicker here is that ol' Cort made it known that he'd do his damndest to finish atop the poll the following year.
Not only is he a dirty dood, but he likes being that way and tries to use it as a psychological advantage against the receivers he covers week-in and week-out. Those sort of prodding tactics work against a lot of guys, but I never in my life thought I would see Andre Johnson be goaded into ripping Finnegan's helmet off and pounding him in the back of the head. Johnson is among the top three wide receivers in the league (you can shuffle among AJ, Larry Fitzgerald and Randy Moss as far as I'm concerned), and over eight seasons with the Texans has proven himself the epitome of class and high moral character. 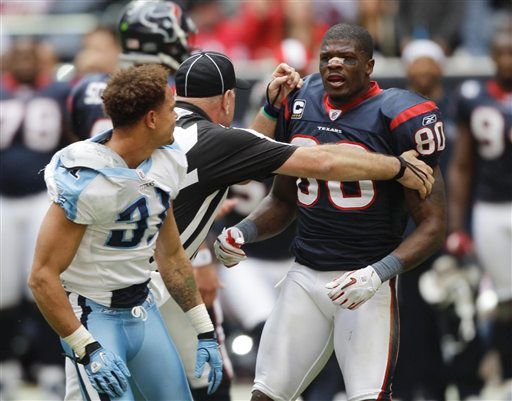 At a position that is filled with outspoken divas throughout the league (T.O., Ochocinco, Randy Moss, Brandon Marshall, Braylon Edwards, et al), Johnson is a rare combination of freakish talent as a pass-catcher and unshaking modesty as a person. His teammates often comment on his lack of spotlight lust and his demure personality, so ruffling this big bird's feathers seems a particularly daunting task. But I guess when you're Cortland Finnegan (who is looking more and more like a redbone Pauly D these days), the power of your own brackish personality can try the patience of even the coolest of customers.

Okay, so the fight happened. The hockey-like, OMG, text your friends, "we're going to be watching video of this all week on ESPN", did-you-see-that fight, happened. Now, though it had a definite hockey feel to it, that sport condones fighting, if not outwardly encouraging it. The modern NFL is a horse of a different color though, if you look at recent fines and suspensions under commissioner Roger Goodell. We've seen this season that suspensions and big fines await anyone who cracks a defenseless receiver or leads with their helmet. Goodell and the NFL brass have made it very clear not only this season, but over the past few, that the Shield stands for something and that there's certain shit you just don't do on the gridiron these days.
So these two are definitely sitting out at least a game for all of this nonsense, right? Wrong.
Amazingly, each player was fined just $25,000 and neither will miss any game time (other than the quarter or so they already missed when ejected from Sunday's game) as a result of the fight. This has to be one of the most hypocritical decisions I've seen come out of the NFL front office in a very long time, and if you'll recall, I just made a very similar statement about a month ago when their new "policy" on big hits was "reinforced." If the aim of the league is to protect players and downplay the violent nature of the game, in what way does a light punishment for an all out slugfest help to do either?
The NFL has absolutely no excuse for not benching both of these guys for a game (at least) and doubling the amount of the fines levied. If you're going to take $25K from James Harrison almost every other week for the way he tackles people, you have to shut both of these players down for at least a game for ripping each others' helmets off and throwing down in the middle of the field of play--end of story.
Johnson in particular, though provoked by Finnegan, was raining haymakers with no concern for anyone watching in the stadium or at home, and for a league that has proven that it wants to polish it's violent image as much as possible as the years push on, there's just no way to justify this slap on the wrist. Slap on the wrist actually gives the action taken by the league too much credit. This was a kiss on the forehead, gift wrapped in cotton candy, and floated in on a cloud.
Johnson has a sterling reputation and apologized immediately for losing his cool, but the fact remains that he ripped a man's helmet off and started beating him senseless on the football field. You can't just let that go Roger Goodell, I don't care how you want to justify it. Some pundits are already pushing forth conspiracy theories that since the Texans play in the Thursday night game on the NFL Network, the two players were let off the hook so Johnson could let his star shine on the league's big money maker (obviously, letting Johnson out of a suspension left the league no choice but to do the same for Finnegan).
I'm personally not buying that, but I am buying the fact that the NFL just doesn't know what to do with itself these days. The league seems to be stuck between nostalgia for a bygone era where men were men and players were true gladiators, and a more tempered, safety-first, cuddly form of football that to this writer seems nothing short of nausea inducing. The NFL wants to protect the quarterback, rob defenses of their ability to be aggressive, and prevent the cloud of concussion related brain damage from tarnishing the league's image forever, but two guys fist fighting and trying to rip each others' heads off in front of a national audience is pretty much condoned? I don't get it, and I don't think a lot of other fans do either.
Make up your mind Mr. Goodell, because the fans already know why they love football, and it's got nothing to do with suspensions and fines. It's got everything to do with the ability of increasingly talented athletes and the violent contests they choose to take part in. We all know what we're getting into here--whether it be fan, player, owner, whatever--and we all keep coming back for more. The NFL needs to quickly decide what brand of violence it would like to market and to what degree it can continue to do so successfully.
The audience and their attitudes toward the game aren't going anywhere, and aren't changing anytime soon, so the league needs to stop leading us down disparate paths and hoping that we'll meet them somewhere in the middle. Football is king in American sports for a reason, even if the NFL doesn't want to admit what that reason is.
Posted by Marky Schultz at 12:27 AM